First-time dad – Having a baby in Australia 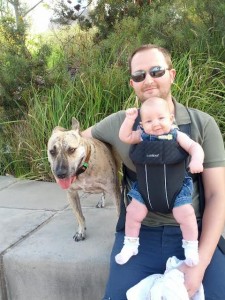 We are lucky enough to have many expat mums share their pregnancy and birth stories with us, but this time we asked for a father’s perspective. Mike Stuart, a British chef now living in Australia is the proud dad of Georgina, born in October last year.

Having grown up in Manchester, UK, I went on to study French & business management at Manchester University. While studying, I found myself learning to love fine food, and I made the decision before I graduated that I wanted to own a restaurant one day.

In 2009 I planned to travel around the world for about 18 months, however, having arrived in Australia I immediately began to fall in love with the place. The culture is a tapestry of every corner of the globe, although, obviously, there is a large British influence here. After seeing some of the country, I got a temporary job in Sydney over Christmas. However, my temporary job ended becoming much more permanent, and almost three years later, when the restaurant I was working in closed down, I was already living with my partner, Melinda, and firmly attached to Sydney.

Now, nearly two years further down the track, we have a daughter, Georgina, who was born on Halloween last year, and a clumsy, excitable and thoroughly lovable dog, Elsa.

I found the public pre-natal care in Sydney to be superb. We attended the Royal Hospital for Women in Randwick. We never even considered going private as Melinda’s health insurance did not cover pregnancy and we could not afford to pay out of our own pocket. Nevertheless, at every appointment, the midwife was attentive and knowledgeable, although we often had to wait for over an hour past our appointment time.

The hospital also provided classes for pre-natal, birth and post-natal information (We attended the ‘intensive’ courses, which were 2 x 4 hours at a total of about AU$250). We had a couple of scares when we didn’t feel the baby kick for a day or so during the pregnancy, but after a quick checkup at the hospital we were reassured that everything was fine. We didn’t have to pay for any midwifery appointments or even the emergency checkup, it was all covered by Medicare – although Melinda is an Australian citizen so I am unsure how much would be covered for an expat.

Georgie’s birth was, frankly, terrifying. On Wednesday 23rd October, Melinda was in pre-labour. We’d read all about it and we were calm and ready for the baby to arrive. However, pre-labour can last for 4 hours, or it can stop and the baby might not arrive for another 4 weeks. Georgie didn’t seem to want to come out. We didn’t get much sleep the rest of that week, despite the contractions being all but stopped from Thursday onwards. I was back at work on Friday, and we were simply hoping for contractions to start again, but we had no idea when it would happen.

On the Monday, 28th, Melinda hadn’t felt the baby kicking, so we went back to the hospital for a checkup. However, it was then that we found out that it’s their policy to induce labour if we reported ‘reduced foetal movements’ twice. So this was it! Or so we thought. We were shown to a single room in the pre-natal ward, only to be told an hour later that they were too busy with inductions and we’d have to come back the following day.

As a public hospital, they try to limit inductions to 5-6 women, and as it typically takes 24 hours, they aim to have babies born during business hours, as they have more staff available. It sounds odd, but really it makes sense. In the end, Georgie was born close to midnight and the staff were running from birth to birth as there was only one team on at night.

We returned to the hospital on the Tuesday, and having planned on avoiding an induction, we hadn’t read much about it. We thought it’d be a relatively straightforward procedure that takes x amount of hours and the baby will be out. In hindsight, we should have known that nothing in pregnancy, or birth, is ever straightforward!

Melinda was given a shared room this time, although most of the two and half days she was there, we were alone. We only had company for a few hours – a woman came in, screaming in pain, was given pethidine (which is similar to morphine) and went to sleep. A few hours later she awoke and was taken downstairs to have her baby. The first round of treatment for inducing the baby was pain-free and easy, however we were both more nervous than we’d ever been before. Several hours later, when the second treatment was due, the baby’s heart rate was too high – signaling distress – so the doctor refused to administer it. Instead Melinda was given a saline drip to rehydrate and to calm the baby.

Husbands and partners are not generally allowed to stay overnight in the public hospital, but because of the stress that Melinda and the baby were under, I was given a fold-out mattress – not that I got much more than an hour of sleep. The following day, an alternative method of inducing labour was attempted. This had marginally more success, as Melinda dilated to about one centimetre, but Georgie was stubbornly staying inside and labour slowed again. At this point, we were still expecting to have the baby that day, but we found out that we would probably have to wait until the next day before we saw any real progress. I had to go home that night, although I was back well before visiting hours in the morning.

Thursday 31st was the day that Georgie finally arrived. Melinda was transferred to the birth suite, and she had syntocinon attached to her drip, which chemically induced labour – the previous, failed, treatments tried to kick-start natural labour – however the syntocinon brings it on with a vengeance. In natural labour, the pain of the contractions would gradually increase over time, whereas being induced on syntocinon brings the full strength contractions on more or less immediately and regularly. After six hours of feeling entirely helpless as I watched Melinda scream in pain every couple of minutes, she agreed to have an epidural.

Soon afterwards, the pain had completely gone – as well as most of the feeling below her chest – and Melinda slept soundly. I couldn’t, however. I stared at the monitor, checking Melinda was OK, without even really knowing what OK was any more. I was exhausted – obviously nothing compared to Melinda, but I could not close my eyes for a second because I knew the baby was coming. We had four midwives over the course of this stage of labour, as the shifts changed frequently. As darkness fell, I was aware something wasn’t quite right – the young British midwife spent a lot of time in our room, simply watching the monitor. I knew that she must have other women in other rooms, so something wasn’t really going right.

At about 9pm, the midwife woke Melinda and summoned the obstetrician. The baby’s heart rate was once again very high, and had been for hours. The doctor tried to get a sample of the baby’s blood, while she was still in utero, but for one reason or another he couldn’t get a good quality sample, and we were told that Melinda had to have a caesarean. It was the last thing we had wanted, but at the point we were so terrified that we may in fact lose the baby that we knew that the medical team would do whatever was necessary. Within an hour, Melinda was in surgery. I was told little, other than that I could be in surgery with her, as long as I signed a handful of papers saying that I’d do what I was told, leave if told to leave, and pretty much just stay out of the way. I was shaking, nauseous and just couldn’t believe what was going on.

The surgery went without problems, and it took less than ten minutes before our baby girl was out in the fresh air for the first time, testing out her lungs with an ear-piercing scream. After the baby had had her checkups and had been cleaned and weighed, we held her in our arms. I couldn’t believe that this tiny baby was ours.

Thank you for sharing your experience with us Mike. Georgina is beautiful and clearly unaware of her difficult entrance into the world!