Keeping your children safe this Halloween 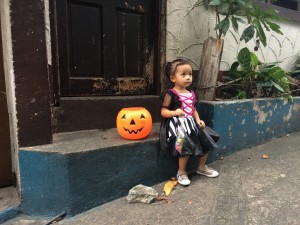 Avoid buying costumes made from cheap materials and check the label for information on flammability.

This Halloween marks the one year anniversary of Claudia Winkleman’s own personal horror story when her 8-year-old daughter Matilda’s costume caught on fire after brushing against a candle.

In the months after the terrible incident, the British television presenter launched a campaign to raise awareness of the flammability of these costumes. Due to her efforts, there are now safety regulations and flammability tests being enforced in the UK this Halloween to assess whether costumes are compliant with the safety regulations.

Months after the incident, Winkleman said “I wish I had been dressed as the witch; is mainly all I wish, that it had happened to me… she went up, and I don’t want that to happen to another child.” Winkleman’s message is poignant and it resonates with mothers all around the world who can relate to the presenter’s anguish.

Halloween is celebrated differently across the globe but dressing up is often a common tradition, particularly amongst the younger generation. So how can parents choose a safe costume for their children? Although the UK now take the fire retardancy of these costumes more seriously, this may not be the case if you are living in other parts of the world.

When you are buying your child’s Halloween costume, take a moment to check the following things and remember the advice:

Your children should know that in the event of their costume catching fire, they should stop what they are doing, get on the ground and roll around to suffocate the flame.

Trick or Treat? Keep your wits about you

Many children go trick or treating on the evening of All Hallow’s eve, which often involves knocking from door to door hoping to collect as many sweets and chocolate as they can fit in their plastic cauldrons. In the buzz of excitement, children may not be as street smart as they usually would be. As a parent, it’s important to remind your children to stay safe while out wandering the streets at night:

Halloween should be a fun occasion for both children and parents so long as there are clear rules in place which your children can abide by if they go out trick or treating.