What the world eats at Christmas 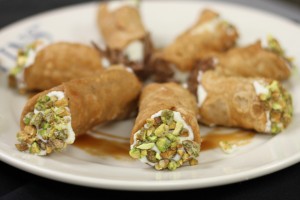 In Italy, seafood and fish are the stars of the dinner table.

When you’ve been having the same Christmas dinner every year of your life, it’s hard to imagine eating anything else. In my case the Christmas dinner is turkey, pasta, salad and way too much dessert. People seldom contemplate trying something new, especially if it is an ingrained tradition in your family.

If you’re living abroad and you are spending your first Christmas abroad as an expat family you may be forced to give up certain traditions and embrace some new ones.

It may seem like that’s the end of Christmas dinner for you – and while you may certainly not stop celebrating, you could start trying new culinary experiences. Across the world, Christmas dinners vary; you won’t know what you’re missing out on until you try it. Check out what people are eating for Christmas around the world.

Italy: the first thing that comes to mind might be pasta and meat; however, most italian families give up meat for Christmas and make room for The Feast of the Seven Fishes: cod, eel, calamari, shrimp and the likes are the stars of the table. Meat and pasta are often served the day following Christmas.

Iceland: although the main dish is smoked lamb – many icelanders continue to  serve an array of meats including: roast pork, beef, goose and even reindeer for Christmas dinner. You might want to tell your children a little white lie about the reindeer, or you might have some “but what about Rudolph” explaining to do.

Germany: who knew the germans were so fond of cheese? Other than potato salad, sausage, spaetzle and Christmas goose (with a side of German dumplings), this festive feast will feature raclette and several different types of fondue. How very Swiss of them.

Slovakia: their food isn’t quite as unusual as the prepping they do. Kapustnica and fried carp are the slovak’s Christmas special – the twist comes in the fact that families buy a live carp and keep it in their bathtub until they have to cook it. You might be risking your children getting attached to their “pet carp” and even giving it a name.

Australia: Santa Claus may be wearing shorts and surfing during the summer Christmas holidays, but they are still very keen on the traditional British meal. However, barbecues and picnics are the norm, rather than the exception. Nothing screams Christmas to the Aussies like barbecued shrimp on the beach!

Mexico: although dishes vary across the country, you’ll definitely find stews, fish and tamales. Fancy households might nibble on pozole and chiles en nogada, as well. However, the guest of honour in any Mexican household are the  typically sweet and delicious Christmas buñuelos; without them, there’s just no Christmas feeling.

Puerto Rico: other than an array of sweets and puddings, Puerto Rican Christmas dinners may include roast pork, morcilla and the typical Caribbean rice with pigeon peas. Although it’s winter time, the weather is mild, which allows them to host big open parties and huge banquets.

Brazil: just like many other Latin countries, Brazilians do love their turkey. The meat is often marinated with champagne and spices to give it an additional kick. This just gives me yet another reason to pack up and move to Brazil.

This is just a probadita of some of the Christmas dinners around the world, and I’m sure there are plenty more variations from North to South and East to West. Wherever you may be this Christmas season, leave your preferences at home and go try something new. Who knows, maybe Rudolph is tasty!