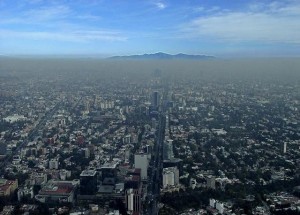 Mexico City was named the most polluted city in the world in 1992.

I was born and (partly) raised in Mexico City, declared by the World Health Organization (WHO) as the dirtiest city in the world in 1992.

Throughout the 90s, I remember “lockdown” days being a frequent feature on the news meaning that we were highly recommended not to be outdoors and to stick to short commutes. I didn’t understand what “air pollution over 100” meant; all I cared about was the fact that I got another day off school. Those were the glory days but unbeknownst to me, those air particles were damaging my health.

Today, Mexico City doesn’t figure anywhere near the most polluted cities in the world. Now that spot is occupied by the heavily polluted New Delhi in India. Surprisingly, however, most pollution-related deaths around the world occur in China, with a whopping 1.4 million deaths caused by air pollution.

A new study revealed recently that 3.3 million deaths worldwide are caused by pollution; strokes, heart attacks and lung damage being the greater causes. That is more than HIV and malaria-related deaths combined. The recommended limit for air to be considered clean is 10 microgrammes per cubic meter according to WHO. Cities in India (13 out of the top 20 most polluted worldwide), as well as Pakistan and Iran are beyond this limit. But it’s not just those countries. The United States, Russia and all of Europe are highly affected by air pollution too.

What is causing these deaths?

The study revealed that North East USA, Europe, Russia, Japan and South Korea’s number one cause of death by air pollution was agriculture. Ammonia and animal waste continue unregulated, harming the health of those around them and, ultimately, resulting in death. Nonetheless, the greatest cause of worldwide deaths relating to air pollution stems from cooking with wood and bio-fuels, a common practice around the world.

Traffic and vehicle emission and power plants are the other silent killers. Busy cities, such as London, are among the protagonists in the rise of  premature deaths caused by pollution. Last year, London reached 6 times the recommended air pollution limit at 57 microgrammes per cubic meter (although it reached 94 in 2012). While efforts are being focused on tackling HIV, malaria, Ebola, unfortunately fresh air appears to be low down on our agenda.

How to keep your family safe

Although the 10 dirtiest cities are basically contained to three countries, the whole world is drowning in smog and soot. Unless you plan on moving to a deserted island, chances are you will be facing some pollution of some kind. However, if you’re an expat in a heavily polluted area, the best thing to do is to know how to keep your family from inhaling too much polluted air.

Here are some recommended solutions:

World pollution is everyone’s problem and you can also do your bit to help reduce your carbon print. If Mexico City was able to half the level of  pollution in two decades, surely we can do something to tackle the global pollution for a cleaner, fresher future.