Could Daylight Saving Time all year round encourage children to be more active? 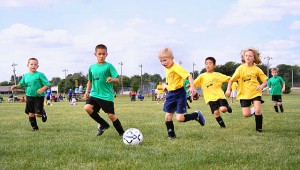 On Sunday 26 October, the clocks went back one hour across Europe, North America, New Zealand, South Australia and some countries in South America, marking the end of Daylight Saving Time (DST). In the UK this date marks the end of what is known as British Summer Time, and thus begins the winter routine of lighter mornings but darker evenings.

A recent study conducted by Anna Goodman from the London School of Hygiene and Tropical Medicine, shows that extended evening daylight plays a role in the increased physical activity in children from 5-16 years old. Interest in this study, particularly in Britain, has reignited the debate about whether a permanent DST schedule, prioritising sunlit evenings over bright mornings, could result in certain health benefits for children.

The study, published in the International Journal of Behavioral Nutrition and Physical Activity, tested 23,000 children (5-16 years old) from nine countries in various continents in both spring and autumn.

The strongest evidence yet?

The results show that on average, these children were “active”, i.e. doing physical exercise, for an average of 33 minutes per day before DST was implemented. However, as of the last Sunday in March (when the clocks went forward) and DST began, the researchers registered an increase of two minutes of physical exercise per day. Researchers concluded that “longer evening daylight was independently associated with a small increase in daily physical activity.”

Researchers are confident that this is the strongest evidence yet to indicate that more light during the “critical hours” of the day, i.e. the evening, increases the level of activity among children across the population. However, the results were only consistent among the children tested in the UK, European countries and Australia, while those children tested in the United States, Brazil and the Portuguese archipelago Madeira, showed no such increase in physical activity.

There have been seven bills and proposals dating back to 1994 concerning the issue of maintaining DST in the UK, with the most recent legislative proposal being The Daylight Saving Bill in 2010-11.

Goodman suggests in her research that a permanent DST schedule would not solve any direct problems associated with low levels of physical activity among British children, however there are possible methods to start making advances in the right direction, such as implementing some of the aforementioned DST proposals in the UK, which could “yield worthwhile public health benefits.”