Expat birth stories: Having a baby in Japan 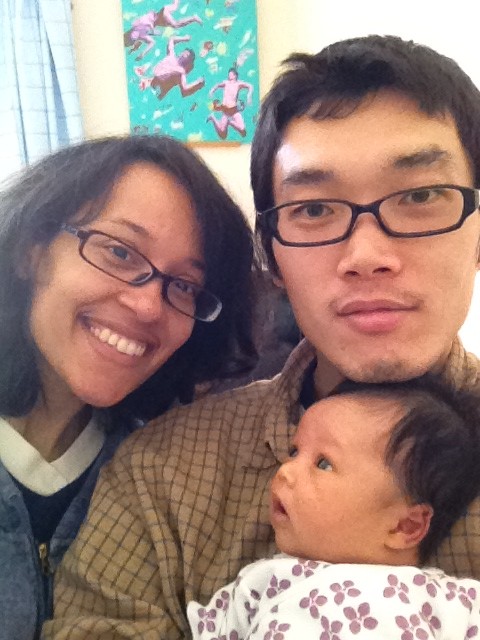 Monika shares her story about giving birth in Japan.

Monika, tell us a little about yourself.

I was born and raised in Austin, Texas (USA) and lived there until I moved to Japan at the age of 24. I intended to only stay a year, but life obviously had other plans for me as I am now 32 years old and married to my Japanese husband. We live in a small town in the northwestern part of Chiba prefecture, about an hour away from Tokyo. I just gave birth to my first child, a beautiful little girl, in early February.

How did you find the pre-natal care in Japan?

I ended up with two very different experiences during my pregnancy in Japan because I switched medical facilities. I went to a small local women’s/maternity clinic for the first 20 weeks, then switched to a larger hospital for the rest pf my pregnancy and birth.

In both cases, I received scans of the baby at each visit, in stark contrast to the States where I’ve heard a woman might receive one or two scans. I loved this as I could really watch my baby grow and feel reassured that she was developing properly at each visit.

Also in both cases, there were generally no English speakers at the clinics. I was a little worried about this at first since I had always been very involved and knowledgeable about my medical care before moving to Japan. My Japanese is adequate, but I lack the specialized vocabulary used at the maternity clinics.

The local clinic was very business-like. Come in. Get scanned. Get out. No one ever explained the clinic’s procedures and policies regarding childbirth. What I did know about their practices came from talking to and visiting friends whom had given birth there.

No mention was made of pre-natal classes or any other support. If I ever had any questions, I had better have had them ready because as soon as the doctor was finished saying his part, a midwife promptly told me that we were done and escorted me out of the room. The head doctor was fairly old-fashioned and quite blunt when giving information. According to friends, many Japanese women found his sternness a little “scary,” but I didn’t mind his straight-forward nature.

What did get to me was his random use of English words that always seemed to be close to the intended meaning, yet slightly shocking for a worried mother-to-be. For example, after performing a scan early in the pregnancy, he firmly stated “No heartbeat. Flatline,” rather than explaining in English or Japanese that it was too early for the equipment to pick up a heartbeat.

I found this system bearable until the head doctor stopped working on Saturdays, the day I scheduled my appointments so I didn’t miss work. The doctor that took over seemed nice enough at the start, but soon weakened mine and my husband’s faith in our choice of clinic.

The doctor refused to explain things to us and answered questions with as little information as possible, sometimes giving single-word answers. He projected a mentality of “I’m the doctor, so don’t worry your pretty little heads over the details.” He even went so far as to tell my husband (in Japanese) that an explanation of a blood test was difficult and he wouldn’t understand. That was the final straw.

So you changed facilities?

Yes, upon recommendation from a friend, my husband and I visited the maternity clinic of Futawa Hospital in the city of Funabashi. Although we were only there to ask a few questions, the doctor was friendly, did not rush us/spent plenty of time with us, gave thoughtful answers and explanations, asked several times if we had any other questions or concerns, and actually gave me some advice (something which never happened at the local clinic despite the fact that they knew I was a first-time mother in a foreign land).

Needless to say, we began going to this hospital immediately, and I have had absolutely no complaints since. Despite having no English-speakers, the staff always made sure that I understood what was happening. As long as I wanted him there, my husband was always welcomed to be with me (he was often asked to wait outside at the local clinic), which also helped my understanding of information.

The hospital’s maternity department was mainly staffed by female doctors, a rare occurrence in Japan. Each visit began with a consultation with a midwife about topics such as breastfeeding, nutrition, my concerns, etc. and was followed by a scan and discussion with the doctor. The hospital offered pre-natal classes as well as maternity yoga.

How do you think the attitudes to pregnancy and pregnant women differ in Japan from the U.S?

It feels like people are a lot more relaxed about pregnancy in the States. I began to feel like the main things I was hearing from my Japanese friends during my pregnancy were “No!” or “That’s dangerous!” A lot of care seems to be taken regarding pregnant women, although advice seems to focus on limitations. Don’t lift anything. Don’t ride a bike. Don’t run. Don’t hop. Don’t go into the ocean. Don’t let your body get cold. Don’t push yourself too hard.

There also seems to be more care taken regarding weight gain during pregnancy in Japan. It’s not uncommon for doctors to set weight limits for their patients here, whereas it seems commonly accepted and excused that women will gain a lot of weight while pregnant in America.

One of the biggest differences between giving birth in America and Japan is the length of the hospital stay. Whereas in the States women only stay in hospital for a couple of days, in Japan the average length of stay is five or six days.

I know many of my American friends are happy to go home quickly after giving birth, but many Japanese women, especially housewives who already have children, consider their hospital stay to be a vacation of sorts. While in hospital, they can take a break from chores and child care and get to eat nutritious food (which is usually delicious by the way). I welcomed the extended stay because it was like being enrolled in a baby care 101 class. I learned so much, was able to ask questions, and got some much needed rest to prepare me for my new life as a mother.

What did you find the hardest about being pregnant and giving birth abroad?

The hardest part was probably trying to accommodate both western and Japanese approaches to pregnancy and trying to figure out what worked best for me without fearing ridicule by my Japanese friends and family. For example, I was always used to hearing how pregnant women should stay active (within reason, of course) and that you could continue activities your body was used to doing. Imagine my surprise when everyone responded to me riding my bike with shock and strong concern even though I rode my bike everywhere before getting pregnant, I wasn‘t showing yet/didn‘t have any changes in balance, and was taking my rides extra slowly. I had to look up online if it was okay just to reassure myself that I wasn’t asking for a miscarriage.

That, and getting a seat on the train during my hour-and-a-half commutes to and from work. (Japanese people are generally polite, but when it comes to morning and evening commutes, it tends to be every man for himself.)

How does the Japanese health system approach giving birth?

“Natural” births, or not using any pain medication, are the norm here in Japan. However, pain medication, as well as English-speaking staff, are more readily available in some of the larger hospitals in Tokyo which are geared more for expat mothers.

From what I knew about our original clinic, they had group rooms, but women could have a private room at an additional cost and depending on availability. I believe fathers could chose to be present for the birth and some birthing plan requests, such as listening to music, were acceptable.

They seemed to push formula use, telling one of my friends that her milk wasn’t in yet, and even when it was, she should supplement to ensure she knew how much her baby was eating. Babies were kept overnight in a nursery.

At the hospital we ended up choosing, fathers were allowed to stay with their wives throughout the entire labor and delivery and birthing plans were welcomed. Private rooms were not available however.

After giving birth, breastfeeding was encouraged and a lactation consultant was always available. The hospital also practiced “kangaroo care,” or having the baby stay with the mother (barring any medical complications), but women could make use of the nursery if they needed a break.

What advice would you give to expat mums having children in Japan?

The best advice that I can give to women having children in Japan is to find a hospital or clinic where you are comfortable. Find a place that fits your needs and desires. Having a baby, though a wonderful experience with the ultimate reward, is physically and mentally exhausting enough. Why add unnecessary frustration to the mix?

It hurt me to realize that I had begun to leave each appointment at our first clinic with a feeling of uneasiness. We were supposed to be happy seeing our baby. Switching clinics to a facility that matched my thoughts and values regarding childbirth and bonding was the best decision I made during my pregnancy. Being in sync with the doctors and midwives and having open lines of communication made pregnancy the joyous experience it is supposed to be for both my husband and I.