Water: the elixir of life (and other benefits) 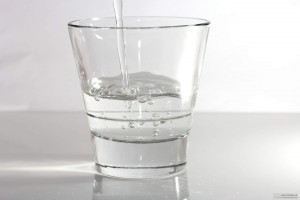 It’s uncertain how much water you should drink per day, so experts recommend you listen to your body’s thirst.

There is no denying that water is the elixir of life; without it, there would be nothing. Despite the speed at which our society is evolving, sometimes we forget the most basic instincts of survival, such as drinking water.

In the 90s, people in the United States were drinking more soda, beer and wine than they were drinking water. But we are reverting to our basic instincts slowly. By 2013, people were drinking 38 per cent more water than 15 years before. Soda, beer and wine consumption have dropped significantly, as well. People are thirsty now, perhaps after noticing the side effects of dehydration (hangovers, anyone?).

It is unclear as to what the actual recommended amount of water per day is. Traditionally, it has been believed that 8 glasses of 8 ounces a day was what the body needed to stay hydrated; however, a Harvard study suggests it can be between 4 and 6 glasses. In reality, it depends on the person (climate, weight, size, amount of exercise and diet). Thirst should be your guide. Additionally, if your urine is dark and smells strongly, you need more water. Urine should be the colour of lemonade (yum!).

The adult human body is made up of between 60 and 75% water, and the benefits of drinking enough throughout the day are endless. First of all, water forms saliva which is necessary for digestion. It lubricates joints, helps flush toxins, waste and bacteria, and regulates body temperature (that’s why you sweat!)

The list goes on: it can help clear your skin and slow down the aging process, it keeps your kidneys healthy, it aids in weight loss and constipation, it keeps bloating at bay, it boosts your energy, it relieves fatigue, betters your mood, and most importantly, keeps your hydration balanced for survival. 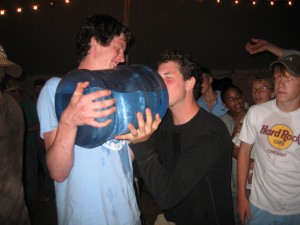 Tipping the scales either way (for anything) is dangerous. Athletes are at special risk of doing so, either drinking too little or too much water. There is such a thing as “water poisoning” and this does not mean that you are drinking contaminated water. Drinking too much water, too fast, in a limited time-frame can cause something known as exercise-associated hyponatremia.

After a workout or, for example, a marathon, athletes are feeling dehydrated and in need of water (or electrolytes).  As a result, drinking too much water causes the kidneys to become overwhelmed and unable to handle the amount of liquid it receives. This causes a drop in sodium which can result in nausea, vomiting, swelling of the cells, and in extreme (but not uncommon) cases, death.

There are ways of figuring out exactly how much water you need to drink after a workout, and it’s as easy as weighing yourself before and afterwards. Any weight shedded, is water lost through sweat. Replace it!

On the other hand, not drinking enough water can encourage the development of asthma, allergies, fatigue, skin disorders, high-blood pressure, digestive disorders, and many other health hazards. The human body can survive up to a month without food, but barely days without water.

Plain water? No thanks!

If you are one of those people whose excuse for not drinking water is that “it tastes like nothing” don’t worry, we have the solution. There are plenty of ways to spice up your water without taking away its benefits and without adding unwanted sugars or calories. Adding lemon to a warm glass of water in the mornings, for example, not only makes it taste better, but it aids weight loss and digestion.

Your glass of water can handle almost anything: cinnamon sticks, natural fruit ice cubes, herbs such as mint, and much more. Additionally, anything to add flavour to your water has health benefits of its own. There is no excuse for not drinking water anymore!

Bonus: carrying a water bottle everywhere you go tricks you into drinking more water. Try it at home away from the kitchen, you will soon realise that you were thirstier than you thought!