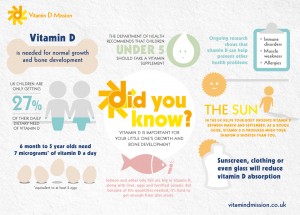 Make sure your little one is getting enough vitamin D.

Recent findings have revealed 60 percent of UK parents are unconcerned about the risk of insufficient vitamin D levels in their children. These figures are worrying health experts who are concerned under-5s in the UK are not getting enough vitamin D due to the lack of awareness.

The Generation D report, commissioned by the Vitamin D Mission, reveals, despite the importance of vitamin D on early development, parents are not fully informed about the health risks associated with a lack of vitamin D.

Vitamin D plays a crucial role in the development of healthy bones and teeth in children and helps the body adsorb vitamin C. The research shows that over three-quarters (77%) of parents are unaware of their toddler’s daily vitamin D requirements and more than a third (35%) saying they never received information regarding their child’s specific needs.

All children in the UK are at risk of not getting enough vitamin D, with studies showing the average toddler is only getting 27 percent of their daily dietary vitamin D requirements (7mg a day).

Clinical consultant for the Vitamin D Mission and paediatrician, Dr Benjamin Jacobs, comments, “I see first-hand the health impacts of low levels of vitamin D in children living in the UK. From poor growth, soft bones and seizures, to heart disease and rickets, not getting enough vitamin D can result in a range of serious health issues in children and adults.”

The Generation D report found, despite government recommendations, only one in seven parents gave their child a daily vitamin D supplement, with three in five admitting they never give their child vitamin supplements at all.

“Many parents are still not getting the message about this vitamin and its importance for child health so children are missing out on the vitamin D they need for healthy growth and development,” said Dr Jacobs.

The most popular UK kids meals contain almost no dietary vitamin, according to the study. Of the seven favourite meals, only one – scrambled eggs – was found to add vitamin D to a child’s diet.

The report also revealed the majority of parents are unsure which foods are a good source of the vitamin, with a fifth naming oranges, 18 percent saying carrots, and more than one in ten mistakenly saying cows’ milk is a source of vitamin D.

Salmon, and other oily fish are a good source of vitamin D, along with fortified cereals, liver, and egg yolks. Sunshine can also help your body produce vitamin D by converting a naturally compound on your skin into the active form of the vitamin. In the UK between March and September the sun can help produce the vitamin, as a rule vitamin D is produced when your shadow is shorter than you.