5 countries where young people are happiest 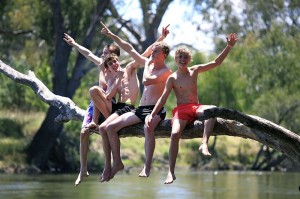 Young people in Australia have the best quality of life.

Out of 30 countries ranked in terms of youth well being, Australia takes the number one spot in a new study from the Centre for Strategic and International Studies (CSIS). The Global Youth Wellbeing Index, in conjunction with the International Youth Foundation (IYF), focused on 40 indicators in six categories to measure the quality of life for people aged between 12 and 24.

Despite coming top overall, Australia’s young people reported feelings of dissatisfaction with the government, and are not optimistic about their economic prospects. On an overall scale of 0 to 1, Australia scored 0.752, compared with Nigeria, the lowest ranked country with 0.375.

In second place, Sweden scores highly for safety & security, and IT access. Similar to other high-income countries, its overall score was driven down by the negative perception of government among its youth. Sweden’s youth are happy with their educational options, scoring above average in educational satisfaction, school enrollment and literacy.

Infamous for its intense work ethic and poor work/life balance, South Korea is doing something right for its younger members of society. It placed in the top ten countries for five of the six general categories, slipping to eleventh place for citizen participation. South Koreans have a higher than average school enrollment, but are unsatisfied with education in all.

In fourth place, the UK was placed in the top ten across all six categories. It does particularly well in the IT, health, and education domains, but is negatively impacted by a weak outlook for future economic opportunities. Youth unemployment was slightly below the average, and youth perception of their value in society was above the average.

The third European country in the top five, Germany performs similarly to other OECD countries and those with a similar GDP. Young people in Germany generally have a positive outlook is most areas of the study. However, despite Germany being relatively economically stable compared to its European neighbours, young Germans have a significantly lower opinion of their wealth and income opportunities compared with the average.

The USA, Japan, Spain, Saudi Arabia, and Thailand make up the remainder of the top ten countries. The study demonstrates, however, that developed countries with strong economies don’t necessarily equal happy, positive young people. While some of the big economies – Germany, the UK and the USA – made up the top ten in this list, others such as Russia (25) and South Africa (23) didn’t.

“The results … show that young people are not necessarily equally served and benefiting from strong economic growth,” the report stated.

“Similarly, the overall results illustrate how policies and institutions can serve youth development needs even where resources may be more constrained, as in Vietnam (11th), which performs above its lower-middle-income peers.”