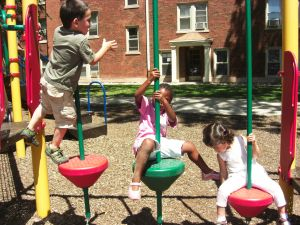 Germany has been rated the number one country for raising kids abroad.

The 2013 HSBC Expat Explorer survey is out, and Germany comes top as the best place to raise expat children. Out of the 24 countries in the Raising Children Abroad league table, Germany performed the best overall, meaning it isn’t just beating its European neighbours in the economy stakes.

The table looks at factors such as education, quality of healthcare, childcare options, and environment. For education, Germany is cost-effective without compromising on quality. Nearly a third (30%) of parents spend less on schooling since moving to Germany, and six in ten (58%) say the quality of education is better in Germany than in their home country.

In Singapore (2nd place), the majority of expat parents (83%) say they are spending more on education, likely due to the cost of international schools, compared to 62% global average of parents saying the same thing.

Behind Germany and Singapore, France came in third place overall. It stood out particularly for the good value of education and childcare. Over half of expat parents reported an improvement in the quality of education (53%) and childcare (56%). Only 45% of expats in France think the cost of raising their children is more expensive in France than in their country of origin, compared with the global average of 67%.

At the other end of the scale are Ireland (24th), Qatar (23rd), and Saudi Arabia (22nd). Ireland scored very poorly for the cost and quality of childcare, and came last for improved health of children. Overall it was rated as a poor country for expat families in terms of improved wellbeing, health and better quality of life for expat kids.

Qatar, second the bottom of the table, scored much higher on better quality of life for children than Ireland. It also ranked higher for improved health, but much lower in terms of cost of education, likely due to international school fees.

For expat families considering a move abroad, New Zealand and South Africa round-off the top five countries for raising children. In Europe, Belgium and Spain make the top ten, with the popular expat destinations of Australia and Canada in 7th and 8th place.

Moving abroad with children is a huge decision, surveys such as this can help families get an idea of the situation before they move. This information, collected from expats already “on-the-ground” can give a very accurate picture of what to expect when you do relocate.