Which countries are the most breastfeeding-friendly? 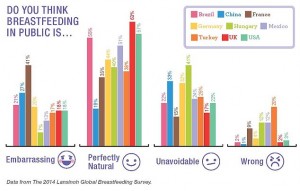 An international survey asks women how they feel about breastfeeding in public.

A recent study has analysed what women really feel about breastfeeding in nine different countries. A contentious issue at times, opinions are divided on every aspect from how long we should breastfeed for, to whether it should be done in public.

The 2014 Lansinoh Global Breastfeeding Survey, conducted by breastfeeding supply company Lansinoh, asked over 13,000 mothers and pregnant women their views on breastfeeding. Expats worried about breastfeeding in public are likely to encounter the least negativity in the UK (63%), USA (57%) , Brazil (55%), and Mexico (51%) where the majority of those questioned see it as “perfectly natural”.

French mothers are the most shy about feeding in public, with 41% saying it is “embarrassing”. This seems to correlate with the fact France’s breastfeeding rates are among the lowest in the world. At the other end of the spectrum, only 7% of Hungarian mothers find nursing a baby in public embarrassing, and most resigned to the fact it’s unavoidable (41%). In Turkey 20% of women surveyed said they think breastfeeding in public is “wrong”.

Women in all countries surveyed selected “health benefits for the baby”, as the main reason they breastfeed (76%-91%). The second most popular reason was to form a close bond with the baby (2%-13%). 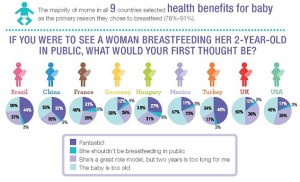 What do you think about breastfeeding a two-year-old?

The, at times, controversial issue of breastfeeding a toddler (WHO recommends breastfeeding up until age 2) was also raised. Participants were asked, “If you saw a woman breastfeeding her 2 year old in public, what would your first thought be?”. Over 50% of women in the UK, Mexico, and Germany said they would think the baby is too old. Women in Turkey and Brazil would be the most supportive with 46% and 44% respectively saying they would think it was ”fantastic”.

“Breastfeeding is a universal experience”

“While this survey highlights what is different across the world, it also points to what is the same, demonstrating that breastfeeding truly is a universal experience. As countries examine ways to support nursing moms through public policies or workplace benefits, this data provides direct insight into the breastfeeding attitudes and behaviors of moms who are currently in this stage of life,” said Kevin Vyse-Peacock, CEO of Lansinoh Laboratories.