When the pregnancy test turns positive in China 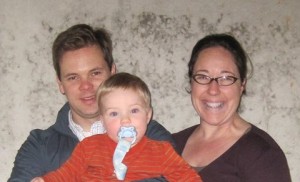 Myra tells us of her pregnancy experience in Beijing

One frosty day during wintertime in Beijing, I absent-mindedly left the house without a hat. Not that a hat was so important, except for the fact that I had just taken a shower, my hair was still wet and it was the middle of winter. Within minutes my hair was frozen to my head and I had a splitting headache. How could I have been so forgetful?

It was too late to turn back though; I had an appointment to keep and it would take me an hour to get across Beijing by subway.

After a long, cold and uncomfortable day my hair had eventually dried but my headache remained. A friend suggested we go for a massage together. Maybe it would help my headache. Massage places are all over Beijing and my favorite location was close-by. I loved getting massages in China for a number of reasons, the main one being that I felt they were a good way to maintain my overall health.

Going for a massage in China is not like going to a spa in the United States. There is no mood music or any relaxing atmosphere to speak of, it’s more like going to the doctor. The masseuse will tell you what’s wrong with you and will give suggestions on foods or drinks to avoid. They know if you get enough sleep or have indigestion problems. They know these things just by using acupressure. As you read this you may be thinking it’s all a crock, but keep reading…

Are you sure you’re not pregnant?

I settled into the massage chair, my feet soaking in a tub of hot water and starting chatting with my friend and the masseuse. It wasn’t long before she had a funny look on her face and started massaging my feet differently than she usually did. Then she asked me in Chinese, “Are you pregnant?”

I’m sure I must have looked shocked and I laughingly replied back in Chinese, “No way!”

The masseuse gave me another funny look. I didn’t give her comment another thought until I started getting sick about a week later.

I made the futon in our apartment my permanent residence. I was sleeping so much and if I got up, I felt sick again. I had been so tired, but passed it off as leftover South Africa jet lag. I blamed my sickness on South Africa. My husband didn’t feel that great too, so we must have caught the same thing. We had plans to fly to Chengdu in Sichuan province for business and thought seriously of cancelling our trip, but we went anyway. While in Chengdu, after spending an entire evening in the bathroom, I told my husband “If I didn’t know any better I would think I was pregnant.” Even then I wouldn’t allow myself to really think I was.

I had no idea what to do

I didn’t think I could handle being pregnant in China because I didn’t know the first thing about what to do. Since we didn’t have medical insurance in China, we suffered at home when we were sick with illnesses and upsets that new expats tend to get when they are living in their adopted country.

Finally, I decided enough was enough. I looked up “pregnancy test” in Chinese and took myself to the nearest store I thought might have them. At first, the staff showed me the condom section, but eventually I found pregnancy tests.

I took one as soon as I got home. It was positive. I took another one. Positive again. I showed my husband and we sat in silence until I started to cry. The masseuse was right! What would I do? My husband suggested calling an expat friend who would know. I called her, and she did indeed know just what to do.

The next day, we went to the Vista Clinic in Beijing’s Central Business District. It’s a Western style medical group, with none of the lines, smoke, dirty bathrooms and chaos that Chinese hospitals often seem to have. It was just what I needed; when I entered the doors I felt like I was back in the States. I had never been pregnant before and while I know there are some very good Chinese hospitals in Beijing, I wanted to make things as familiar as possible for myself. Everyone spoke English, all my questions were answered. My doctor was Chinese but had been to medical school in Boston. For a flat fee of US$1,000, I received prenatal care that would rival any in the States. Even when I returned to the States when I was 30 weeks along to prepare for my son’s birth, my obstetrician at Vista gave me my medical file with no hassle.

Now my son is almost two years old and I still think of the time we spent in China as the best years of our lives, and there’s something to be said for Chinese acupressure massage.

We want our son to experience China and have the goal of moving back there when he is older. And if there happens to be a Baby Number 2 in the future while we’re in China, I’m pretty confident I could stay and give birth there. My Chinese OB even gave me her personal email and told me to look her up if I ever need her again.

Myra Brien is a travel lover and aspiring writer who currently lives in northern California. After travelling the world and living in Beijing, China for two years, Myra returned to her hometown with her husband and a little souvenir from South Africa named Elliot who was born last year. She writes the Interactive Expat blog, as well as the Calculated Adventurist column while scheming a return to China with her husband and son.

Was your choice not to have your son in Beijing, calculated, or because of insurance?