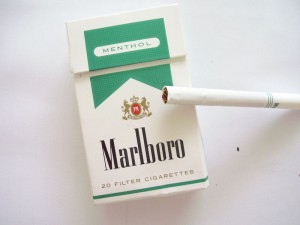 Researchers found that among students who reported smoking cigarettes in the 30 days prior to the study, 32 percent said they used menthol cigarettes. Previous research suggests the use of fruit, menthol, and other flavours makes tobacco more palatable to new users, especially young people.

The University of Waterloo study, published Thursday in the U.S. Centers for Disease Control journal Preventing Chronic Disease, is based on the 2010-2011 Youth Smoking Survey of Grade 9-12 students from across Canada.

Lead author Leia Minaker, a postdoctoral fellow at the university’s Propel Centre for Population Health Impact, said the tobacco industry promotes cigarettes, small cigars or cigarillos and smokeless tobacco with a variety of flavours and glitzy packaging to attract young people to the addictive products. She went on to say how masking the flavour of tobacco makes it more attractive to young smokers, meaning they are more susceptible to take up the habit.

“If people are going to use tobacco, then it should taste like tobacco,” she said from Waterloo, Ont. “It should be harsh smoke that they’re inhaling and should not be hidden in the flavours that are being added to the products.”

When Minaker picked up a package of grape-flavoured cigarillos to illustrate a talk she was giving on flavoured tobacco, she asked her five-year-old daughter to smell the product. “And she said: ‘Oh, that’s delicious!’” reports City News Toronto.

“Despite what many people think to be a ban on kid-friendly flavours, in fact more than half of our youth tobacco users are using a flavoured product,” said study co-author David Hammond, a professor in the school of public health at the University of Waterloo. The findings “were a surprise to me,” Hammond said. “Thirty-two per cent of youth smokers reported menthol use. That’s somewhere around five to six times more than adult use.”

A separate Waterloo University study, recently published in the journal Cancer Causes and Control, found that young people who smoked menthol cigarettes were almost three times more likely to say they would continue the habit and also would puff more per day, compared to kids who smoked non-menthol brands.

“If tobacco use is really appealing for kids, then more kids will start to use tobacco. And tobacco is incredibly addictive and it will make it harder and harder for people to quit and to remain tobacco-free for life,” Minaker told City News Toronto.