Drinking with your children: for or against? 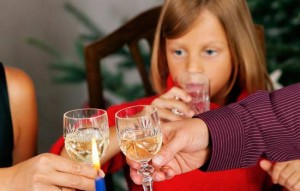 Conservative parents argue that allowing your children to drink at home sends out the wrong message.

Binge drinking is a growing problem among youths in many countries. Naturally, the finger of accusation is more often than not directed towards the parent. This has sparked a number of debates and studies into the effects of allowing your children to drink alcohol, even sips here and there, under parental supervision.

Drinking is very important part of the culture of many countries. France, for example, is famous for its love of wine and is often parodied as a nation that let children drink all the time. I grew up in a small town in the UK where my father’s social life involved regular trips to the pub, to which I was often dragged along too. I would be allowed sips of his beer and occasionally one of my own. I personally have grown up with a real respect for alcohol and, with a few exceptions, don’t drink to the point of intoxication.

Should we let children have a drink?

Liberal parents, like my own, see no problem in allowing their child to have a sip of alcohol here and there. I think that parents are at risk of unconsciously creating an allure regarding alcohol; turning it into the “forbidden fruit” for any rebellious, or merely curious, adolescent.

Some argue that allowing your children to have sips of alcohol will help them to become more responsible drinkers. Drinking in moderation at home, while presumably “supervised” by a parent, is likely to lead to less out of control binge-drinking as soon as the parents are out of sight.

It has been pointed out, in this article, that there are a number of studies that show a certain correlation between early drinking and later alcohol issues, but the researchers cannot prove causation. The studies fail to take into account other factors which contribute to alcohol issues amongst adolescents, i.e. a predisposition to addictive behaviour.

Should we prohibit children from drinking alcohol?

The conservative parent argues that there is a legal drinking age for a reason, that under no circumstances should children below this age drink any measure of alcohol since it is detrimental to their health.

Many parents fear that by allowing their children to have sips of alcohol, this sends the wrong message. Children will subconsciously think that alcohol is okay and furthermore, that it has received the “stamp of approval” from their parents. This in turn may lead to problems associated with alcohol later down the line.

A collaborative report entitled “Providing alcohol for underage youth: what messages should we be sending parents” by researchers from four different institutions, used a number of studies in order to conclude that providing alcohol to children increases the risk of alcohol abuse later in life. The report discourages parents from allowing their children to drink until they reach the legal age in their country.

The studies, however, make no distinction between allowing supervised sips of drinks and buying alcohol for children to drink unsupervised. These are obviously opposite ends of the spectrum and of course forces parents to question to what extent either can be regarded as “providing alcohol to underage youth”.

Talking to the kids

Several studies have shown us that parents who decide to communicate their expectations in a give-and-take style with their children are more effective at keeping them from alcohol abuse than those who are authoritarian, permissive or disengaged.

Drinking is a big part of cultures all around the world and it is only natural that your children will be aware and curious about it. Instead of trying to suppress this natural curiosity, take some time to discuss the subject of alcohol: why people drink it, the reasons people drink it, the reason there is an age limit, how to drink responsibly and the risks/consequences of drinking. This is the only way to lower abuse in the future.